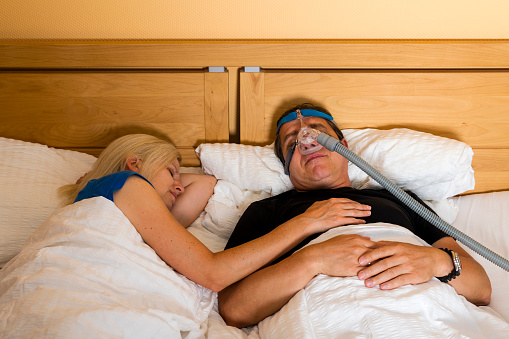 Sleep apnea affects many people that we work with in the rehab world.  But do we really understand how it may affect their bodies as a whole, what other co-morbidities are often present, and how this all plays a part in their outcomes?  Sleep apnea is often something we see in a past medical history, and we think of it as just something that disrupts sleep.  But we do not often think of it as something that would change the way we look at our patients’ overall care.  The connection between sleep apnea and heart failure may make you rethink about how you approach these patients.

First- the basics. There are two types of Sleep Apnea – Central and Obstructive.

The relationship between heart failure and sleep apnea is multifactorial and therefore can be tricky to ensure the right interventions are in place.  Increased pulmonary congestion is thought to contribute to increased respiratory control instability and could lead to central sleep apnea.

Central sleep apnea is generally defined as when the brain temporarily stops sending signals to the muscles responsible for breathing.  Central sleep apnea in patients with heart failure is usually characterized by something called Cheyne-Stokes respirations.  This is an abnormal pattern of breathing characterized by a crescendo-decrescendo cycle that lasts anywhere from 30 sec to 2 min.  The person would be observed to take breaths which are increasingly deeper and faster (the crescendo) followed by breaths that are more slow and shallow (the decrescendo) that eventually result in temporary stops in breathing, or apnea.  Then the pattern repeats.

And although those numbers are quite significant in the prevalence of Cheyne-Stokes respirations (and therefore central sleep apnea) in the heart failure population, cervical venous congestion may equally effect the upper airway and could lead to obstructive sleep apnea as well.  The congestion takes up space and obstructs airflow.

Treatment-wise, there is a fair amount of research regarding nocturnal supports that these patients may be prescribed.  As mentioned before, these patients usually have many factors and comorbidities to consider, so it is important to simply be aware of what the current research is saying in order to have an informed discussion with the team when needed.  We most often see CPAP being used by our patients but seeing now that it is not only obstructive sleep apnea that occurs with heart failure patients (but a combination of the types of apnea), this may not be the best choice.  There are other options that may be more suitable for central sleep apnea and for a combination apnea.

To learn more about Sleep Apnea and resources you can provide to your patients, check out https://www.sleepapnea.org/

What treatments are available for Sleep Apnea?

Adaptive Servo Ventilation utilizes positive airway pressure ventilatory support that adjusts based on the detection of apneas during sleep.  So, the ventilation is provided only when the machine detects pauses in breathing.  There is a fair amount of research for this type of support with patients who have heart failure with central sleep apnea.  Some studies have limitations with participation or compliance, but this has been shown to be the best choice in reducing episodes of apnea in this population.  This is thought to be due to the ability to adjust the mode of delivery and can target those patients that have a combination of Central Sleep Apnea and Obstructive Sleep Apnea.

Oxygen treatment has shown to be fairly effective but would not be the primary choice of treatment in either type of sleep apnea.  This could be used as a second line of treatment if someone does not tolerate the other devices or responds negatively to them.  By wearing the concentrated oxygen overnight, the patients do get some benefit by increasing the oxygen stores in the body and therefore reduces the ups and downs in the blood gases during periods of apnea.

Transvenous Phrenic Nerve Stimulation can also be an option for Central Sleep Apnea.  This is where a device is implanted that stimulates the phrenic nerve to initiate breaths.  Initial studies revolving around this intervention have shown significant reduction in the episodes of apnea during sleep.  So for cases that have been identified as Central vs. Obstructive, this may be worth discussing.

As you can see there are many factors to take into account.  More research is certainly needed, but it always helps to stay informed of what your patients’ choices are in order to not only have educated discussions with the care team, but also to steer the patients and caregivers toward the best choices based on current research.

In addition to various devices that your patients may be using, you certainly want to pay attention to some more basic factors that sleep apnea brings into the mix.  It is well known that lung volume is greater when in a sitting position or a side-lying position as compared to a supine position.  This is almost immediately evident when we ask our patients to lie down.  One of the first things they may say is that they either can’t… or that they need 5-6 pillows.  This could be a great opportunity for us to provide education on several options for comfortable positioning during sleep and rest periods.

How does Sleep Apnea affect our patients?

Research has also shown that some of the effects that apnea has on our bodies do not simple go away in the morning and show up again at night.  When someone has pauses in their breathing at night this causes an increase in sympathetic activity.  This increased sympathetic activity will then cause peripheral vasoconstriction and in turn cause increases in blood pressure and increased work for the cardiac muscle.  A vicious domino effect that lasts throughout the time they are awake.

Without decreasing the apnea during sleep, there’s not much we can do to correct this.  However, it is important to continue to monitor vitals and document the patient’s response to activity – their system is being taxed even when they are at rest (from the increased sympathetic tone)… so tolerance to activity may even be poorer still than compared to someone without sleep apnea.  You can see why it is important for us to be in tune with what is going on with our patients’ sleep and being able to guide them effectively to tap into the treatments that are right for them!

To learn more about the (not so obvious) aspects of heart failure, check out our short (but information packed!) webinar – Update Your Care Plan: Heart Failure.